Pure and Impure Pipes in Angular 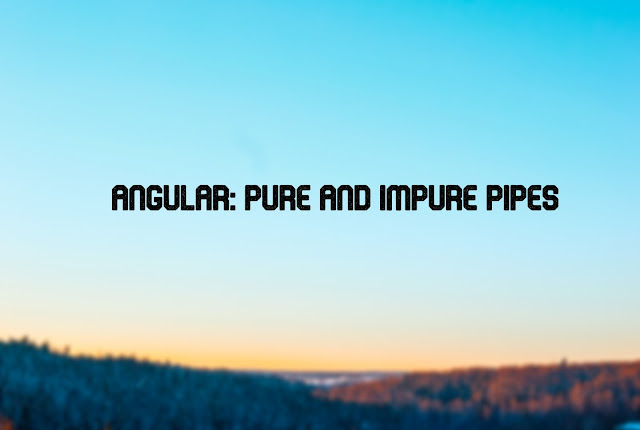 During the creation of custom pipes in Angular, we can define the type of pipes as pure or impure pipes. By default, every custom pipe is a pure pipe. A pure pipe uses a pure function.
A pure function is a function that produces the same output on giving the same inputs. It doesn't have any internal state that will affect the output. All the operations carried out by a pure function are independent of any state. In pure function, the input value can determine the output value change. Only one instance can be used across many usages of the pure function.

An impure function has an internal state that affects the output change. It can produce different output results on giving the same input value as well. We can't share this function as it depends on internal state which can be changed.

A pure pipe uses a pure function. It is only called when Angular detects a change in the value or the parameters passed as an input to a pipe. A pure pipe has many advantages over impure pipe:

Async Pipe - This is an impure pipe. As async pipe deals with observables, it is marked as impure. This pipe has its own internal state which deals with the subscription of the observables under the hood. Angular has to create the instance of this pipe every single time as it is used with different observables. We can't use the same instance of this pipe as this will interfere observables with each other. This pipe is called on every change detection cycle as observable can produce new value at any point in time. So we need to process the value at every digest cycle.

JsonPipe and SlicePipe - These both pipes are considered impure as the inputs passed to both are mutable. If the input is of type mutable, we need to call the pipe at every change detection cycle. An input object can be changed without changing the object reference. These both pipes doesn't have any internal state. But still considered as impure.
angular